America for Animals is a 501(c)3 nonprofit organization. We empower advocates to promote compassion and fight animal cruelty in the communities where they live. Click here to view volunteer opportunities.

America for Animals is a 501(c)3 nonprofit organization. We empower advocates to promote compassion and fight animal cruelty in the communities where they live. We are headquartered in San Diego, but work with highly skilled volunteers around the world.

Save Orangutans, Ditch Palm Oil and Bring Back the Bison

I recently returned from a trip to Sarawak, Malaysia (Borneo). There my wife and I spent two weeks volunteering at a wildlife center for orangutans and other animals who have either lost or been taken from their natural habitats. Volunteering is a great way to help these amazing animals, but the issues they face are complex and their issues are intertwined with many other animal welfare issues worth talking about. With this in mind, Iā€™d like to take a wider view of their situation, which I think will be most helpful to people looking to make a difference. These issues are not limited to the underdeveloped world ā€“ they are issues for the developed (and developing) world as well!

Lucky for you the Center also has open doors for those willing to trade labor and sweat for an amazing experience. The two weeks that my wife and I spent volunteering (or volun-touring) there were shared with 15 like-minded volunteers from the UK, Sweden, and Australia. Most of us were on two or four week stints, but some hardcore volunteers had already been there for six months or longer! I was a bit skeptical about voluntouring, but the folks at the Orangutan Project make it easy (or at least straight forward). You will be put to work. The work is hard, fulfilling, educational, and fun. The memories you keep after volunteering will last longer than a visit to Eiffel tower. Malaysia is a travelerā€™s dream with first world infrastructure but other-world excitement and very friendly people. In your off time, the also mostly volunteer staff at Matang will help organize weekend outings, so you can enjoy your on and off time equally.

Palm oil. Itā€™s in your potato chips and increasingly in all sorts of processed foods. The threats faced by orangutans and other wildlife are numerous, but one of the greatest is posed by destruction of their natural habitats by palm oil plantations practicing deforestation. Keep eating palm oil and you are contributing towards the wiping out the great orangutans of Indonesia. In a sense, you are adding fuel to the Indonesian Forest Burn - country-sized swath of purposefully-set wildfires across Indonesia that kept Indonesia, Malaysia and Singapore in a haze for months. If it sounds extreme, thatā€™s because it is. Palm oil plantations are burning down rainforests at an alarming rate. Unfortunately orangutans cannot easily outrun the deforestation. They have evolved to require a certain number of square meters of space and if they are displaced, the males will fight, sometimes to the death, for new territory. Consequently, orangutans will often remain in their threatened territories. Farmers fear the orangutans and so they hunt them. Mothers are killed and the babies kept as pets or traded to people who think they are cute. Needless to say, the babies suffer in these circumstances, spending much of their lives in tiny crates, among other forms of mistreatment.

What can I do?
Check the ingredients list of any processed food you buy that you think contains oil. Making this even simpler are Android and iOS apps that help you make that determination: via Google Play or iTunes, search for “Palm oil barcode scanner” and find the best app for your region. It absolutely is worth switching potato chip brands to avoid contributing towards this man-made disaster. One thing that blew us volunteers away was the amount work it takes to keep wildlife in captivity. It takes many hours of labor to simulate what nature would ordinarily have provided. None of the staff at Matang want to keep the animals there ā€“ they would much prefer to release every single one of them ā€“ but so often is the case that animals must remain there for many years if not for their entire lives.

The cleaning process is rigorous, with hours devoted to it everyday. Then comes feeding, and after that is enrichment. Enrichment, roughly speaking, involves giving animals work to do in order to receive their food or treats. Itā€™s a brain workout for the animals and is important for their mental health. These three activities require a lot of manpower and sweat, and every animal at Matang gets several hours of attention to keep the operation healthy.

The work at Matang doesnā€™t stop with keeping the animals healthy and happy. The Center also ensures that when the time comes for the animals to be released back into the wild, they have the best possible chance of survival. The staff starts with daily training sessions to ensure the animals have the right foraging habits. When it is time to release an orangutan, they send two rotating teams out into the rainforest to track the animal daily for six months to ensure everything is ok. They follow the orangutan everywhere it goes.

The professionals at Matang are experts who do their very best to keep the animals physically and mentally healthy. But they will be the first to admit how their work is a daily struggle. In no way shape or form can amateurs take proper care of orangutans, sunbears, or frankly any wild animal. Caring for wild animals as a single individual is a living hell and there is no way to sugarcoat it.

It takes under ten minutes of cruelty (in the form of hunting or poaching) to set in motion either a lifetime of misery suffered by animals kept in captivity, or countless hours of time devoted by animal advocates to help manage the animals at a rehab/sanctuary center like Matang.

It doesnā€™t have to be the Orangutan Project, but go save animals somewhere on your next trip and you wonā€™t be the same. In your daily life consider the use of wild animals ā€“ at zoos, circuses, biotech research, tourism ā€“ and reconsider if you support how those animals are being used and treated. 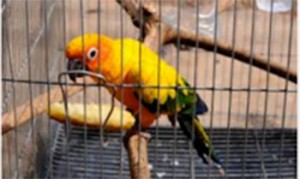 One group of animals that often face mistreatment even in developed countries are wild birds. Ā While we sometimes hear on the news about the occasional exotic animal that escaped captivity, the truth is that this practice of taking wild animals as pets actually takes place on a large scale. We take birds with the most amazing natural gift of flight and put them in small cages so they canā€™t fly. Why do we do this? So that we have someone to sing to us? Yikes. Should we clean up our act before we cast stones at how other countries treat orangutans and monkeys? Yes and no. We definitely should address the treatment of these animals in our own countries, but that shouldnā€™t stop us from also helping animals everywhere. Itā€™s not just the palm oil companies that practice deforestation. We Westerners do it too, or rather we did it. We took a lot of wild lands and turned them into farmland. One way of looking at it is that underdeveloped countries might just be catching up and getting more organized and mechanical with their farming. Yes, rainforests are more important to the global ecosystem than a lot of North American farmland, and itā€™s also true that orangutans might be much more intelligent than displaced animals in western lands ā€“ but itā€™s the same problem, just a matter of degree.

At one time there were 20-30 million bison in N. America. By the late 1800s, we were down to about 1000 bison. Currently there are fewer than 5,000 unfenced true wild bison in North America (although there are half a million cross-bred cattle-bison). It would be amazing to have a Bison wildlife corridor where they could roam through a wild cross section of America. And there are people and organizations working on these types of issues.

Unlike the palm oil companies, the late 1800s farmers were very poor and working under arduous conditions to achieve wealth. Thatā€™s not an acceptable excuse, but itā€™s an excuse that a lot of people errantly make for current palm oil production when it hardly applies.

Animal welfare issues, especially those connected to the food system, are complex, which means it can take time to fully understand them. My advice is for people to work both ends of issues. On one end, help address the immediate plight of an animal cause you are passionate about by rolling up your sleeves and volunteering with a group doing work you admire. At the same time, work on the prevention side to boycott and raise awareness. And if nothing else, check those product labels for palm oil.

Please cut and paste the following URL into you favorite RSS reader.

A link to download the Android App will be sent to your email once you click on Submit.